The mission the Woodland Trail Greenway Association is to advocate for and partner in the development of a publicly-owned multiuse trail and greenway from Pioneer Park to McAlister Springs, linking the cities of Lacey, Olympia and Tumwater in Washington State 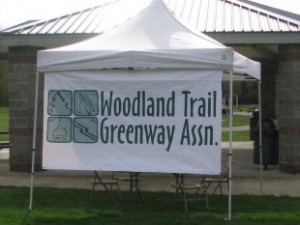 The WTGA began in 1992 as the East-West Greenway Association under the inspired leadership of Jim Rainwood.

In discussion with individuals and neighborhood groups, interest was raised in preserving an undeveloped, environmentally significant corridor of land that stretched from Lacey to Capitol Lake. This wooded ‘greenway’ was deemed essential to preserve as a natural and esthetic enhancement and a most important component of the long-proposed network of trails in the Olympia-Lacey-Tumwater area.

By identifying lands and raising match money, the East-West Greenway group was key to obtaining the federal transportation grant for the work needed to acquire the properties along the abandoned Burlington Northern rail line and other properties in the corridor. As the City of Olympia moved ahead with the complicated task of recovering the corridor lands, City Parks authorized staff to proceed with a master plan for trail and area development.

The Olympia Woodland Trail Master Plan was published in 1999 and endorsed by the city council as the number one parks priority in the comprehensive plan. The development costs of over $12 million is the last barrier to be addressed. After many years, the city will have title on all the properties with the exception of the pending abandonment of the remaining Burlington Northern tracks in Lacey.

The Woodland Trail Greenway Association is dedicated to the creation of a linear park and trail along the Olympia Woodland Trail corridor from the Chehalis-Western Trail in Lacey to the shores of Capitol Lake. The WTGA, formerly the East-West Greenway Association, is a non-profit coalition of active, interested citizens and organizations which serve as a public voice to promote the funding and development of the Olympia Woodland Trail corridor for recreation and natural open space preservation.

We will accomplish our goals through advocacy, political action, education, and fundraising; by developing partnerships with citizens, neighborhood associations, service groups, and business organizations, and by maintaining a volunteer workforce to engage in interim construction and maintenance of this public trail.

In the ten years since the dream began, our association has followed the city’s process, advised on the master plan, maintained voluntary contributions for efforts in support of the Woodland Trail Greenway, and purchased key adjacent lands for preservation in partnership with private donors and the Capitol Land Trust. We have changed the association name to best reflect our mission and focus to the community and potential interest groups and donors.

The future is bright for Thurston County Trails!   We are working with the various agencies on new trails.